THE HISTORY OF THE ST. ELISABETH CHURCH 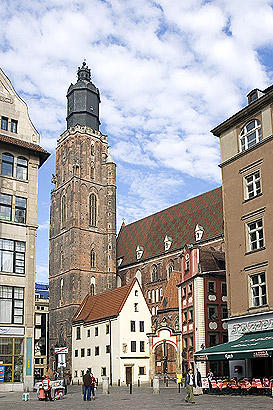 The St. Elisabeth Church is one of the oldest and biggest temples in Wrocław.It is a trinave building with a basilica schedule.The church’s frame with 5 severy bays and the presbytery is 65,20 m long(interior).The height of the middle nave is 29,70 m,of the aisles 13 m,the width of the main nave is 9,80 m.The temple’s dimension are 68,20 long and 27 m wide.

The present – day temple was begun to be built probably in the first decades of the XIV century.The founder was the prince Bolesław III.

The church was initially in the hands of the Crusader Order with the red star (Hospital Brothers),who ran the St.Elisabeth Hospital,and then it became one of the two parish churches(except St.Maria Magdalena church) in the city.

19 November 1257 came the church under the patronage of St.Elisabeth (canonizade in 1235),the king’s Andrew II of Hungary daughter,at the occasion of the temple’s consecration by bishop Thomas I,descendant of Rawicz’ family.

Till 1387 was the temple under the patronage of St.Laurentius and St.Elisabeth.In 1457 was completed the church’s tower..The spire tower reached 130,48 m.It was described by contemporary whriters as the highest and the most beautiful in Silesia.

In 1529 a very stron and gusting wind caused the fall of the tower copula on the churchyard.

In 1531 – 1535 was the tower reconstructed,but in a Rennaisance style,like this one preserved today.

On 6 April 1525 the church seized Protestants and on behalf of them ,the patronage took the pastor Ambrosius Moiban,a Luther’s friend.

Dispite of the church’s Protestant charakter was said there till the end of XVIII century the Holy Mass in polish language.

In 1598 was the church’ roof new covered and it was roofed with the tile of a type called „monk- nun” in a green-red chequered pattern.(and after the fire in 1976 the church was reroofed with the same type of tile.).

In 1856 while preparing the 600 year anniversary of the church’s consecration,among others things,was laid granit-marble tile floor,there were repaired windows of some chapels,temple’s walls were new painted.During these works fell the south arcades along with a part of the south nave’s ceiling. The reconstruction was finished with the church’s consecration on 19 November 1858.

In 1750 – 1761 was built the organ.The organ builder was Michael Engler and his son Benjamin and after Michael’s death this work continued and finished Gottlieb Ziegler.In XIX century it was ,many times rebuilt and an overall repair was accomplished in 1939 – 1941.It had 91 voices.

When Polish people had seized the church in 1946 the organ was repaired and revoiced.It was used not only for religious purposes,but at the times of various entertainments and festivals,like „Wratislavia Cantans”,as well.The fire that took place on 9 June 1976 destroyed completely the organ.

On 2 July 1946 was the church taken from the consistory of the Evangelical-Augsburian Church and given to the military authorities.On this very day said chaplain,lieutenant colonel B.Nowyk the Holy Mass in Polish.From this day became the church a garrison church.

In 1946 – 1947 were conducted many repairing and supporting works and the temple was adapted to the katholic liturgy requirements.

19 September 1975 destroyed a fire the church tower..The next fire,on 9 June 1976 caused more tragic demages.The main organ was totally destroyed,burnt were rafter framing of the main nave,south and north-west aisles and the west gable of the church and the ceiling over the presbytery as well..Interior decorations were partly damaged,the side altars and epitaphs severely suffered.

In 1976 – 1977 were conducted supporting and securing works after this fire.1980 begun the repair works of the church and the tower.

On 2 May 1993 was solemnly consecrated the chapel,placed in the former sacristy,by cardinal Henryk Gulbinowicz.From this time was regularly said Holy Mass in the rebuilded part of the church.

The repair works of the temple finished on 19 May 1997.The church opened its gate for pilgrims coming to Wrocław to take part in the 46 World Eucharistic.

On 15 March 1998 was solemnly founded the civil-military parish.

On 31 May 1998 – the first anniversary of the Pope’s pilgimage and church’s consecration – was solemnly unveiled the bust of the Holy Father,Pope John Paul II.

Just now are continued the works to repair and to restore the chapels,monuments,especially epitaphs (in and outside the church), pulpit, and the like.